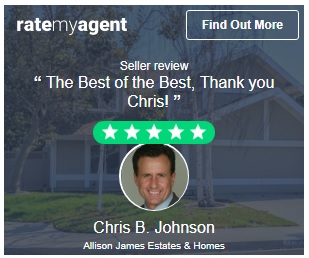 #SellYourHomeForMoreandPayLess #TimeToSell #ChrisBJohnsonRealtor #SellersPayZEROCommission  #ListYourHome&PayNoCommission #BetterThanFSBO #5StarREALTOR®
Your home is probably the biggest asset you own. This is why you should hire a professional to guide you through all your real estate transactions. My goal is to help 24 to 28 families each year either buy or sell a home. I am NOT interested in Selling 100 or 200 homes a year because I would not be able to give each family the time, attention and energy they deserve....
Expect interest rates to continue the slow, steady march higher. That was the message from Federal Reserve Chairman Jerome Powell at his closely watched speech Friday in Jackson Hole, Wyoming, site of the Fed’s annual retreat.

Powell said he sees economic strength in the U.S. economy and plans to keep on the current policy course. He said the Fed is focused on balancing the dual risk of runaway, inflation-inducing growth and opposing forces that could halt expansion.
“I see the current path of gradually raising interest rates as the [Federal Open Market Committee’s] approach to taking seriously both of these risks,” he said. “As the most recent FOMC statement indicates, if the strong growth in income and jobs continues, further gradual increases in the target range for the federal funds rate will likely be appropriate.”
The Fed has approved seven quarter-point rate hikes since December 2015, bringing the target rates up to 1.75 percent to 2 percent. Rates had been at zero during the recession and recovery that began in 2008. There have been two hikes so far this year, and two more are likely coming. Powell said factors that could change the policy course would include unsteady economic conditions overseas. He also said the bank’s policy would change if the domestic economy took a drastic turn for the worse.
As for inflation, Powell said doing too little to control price increases and economic overheating can be a greater risk than doing too much.
“The economy is strong. Inflation is near our 2 percent objective, and most people who want a job are finding one,” he said. “My colleagues and I are carefully monitoring incoming data, and we are setting policy to do what monetary policy can do to support continued growth, a strong labor market, and inflation near 2 percent.”
He indicated a general comfort level with current conditions of sustained strong growth and the Fed’s gradual approach to rate increases.

The speech won’t likely win Powell favor with the White House. Earlier this week, President Trump continued his verbal pressure on the Fed, saying the central bank should be more accommodating in its interest rate policy.
In an interview with Reuters, Trump said he was “not thrilled” with Powell’s stance on rate hikes. The Fed chairman has presided over two rate increases since his presidential appointment. Rates have increased five times since Trump took office.
“I should be given some help by the Fed,” Trump told the news service. He added the central bank should do “what’s good for the country.”

On the housing front, data released this week suggested home price appreciation may be cooling off slightly as summer ends.
The FHFA house price index, released Thursday, rose 0.2 percent in June, one tenth below consensus expectations, and the year-over-year rate slowed to 6.5 percent. Home prices rose in seven of the report’s nine regions, with the largest price increases in the Mountain (+0.7%) and East South Central (+0.6%) regions. Prices declined in the South Atlantic (-0.4%) and New England (-0.4%) regions.
Home price appreciation, driven by demand that outpaces supply, has made affordability a challenge for many buyers. A slower growth rate in home prices may help being balance to a strong seller’s market in many places.
We will see over the coming months if this is a one-month blip or the beginning of a trend. In global economic news this week, Greece is celebrating an end to eight years of government financial crises.
Monday is an historic day for Greece as nearly a decade of external financial help comes to an end.
Back in 2010, the country’s public debt became so high that investors were no longer willing to support the nation’s finances. As a result, Greece has relied on European creditors and the International Monetary Fund (IMF) to keep its finances afloat. Now, Greece can finally claim financial independence.
“Today we celebrate the end of a very long and difficult journey,” European Commission Vice President Valdis Dombrovskis told CNBC. “What matters now is to build on this achievement by sticking to sound fiscal and economic policies.”
However, some analysts argue that this is more a “symbolic” moment and there is plenty yet to do to improve the Greek economy. “Both the EU and the Greeks will try to put a positive spin on the end of the bailout, but there is little to celebrate,” Constantine Fraser, European analyst at research firm TS Lombard, told CNBC via email.
While analysts are still skeptical about the nation’s long-term health, this milestone is a step in the right direction for Europe. If Greece and its neighbors in Southern Europe can keep increasing financial stability, it will boost confidence and could help push interest rates higher.

ABOUT THE AUTHOR: GREG RICHARDSON - EVP OF CAPITAL MARKETS

Greg Richardson is Movement's EVP of Capital Markets and a contributing author to the Movement Blog. His weekly market update is a must-read commentary on financial markets, the mortgage industry and interest rates. Greg is an industry veteran who knows how to read the financial tea leaves and make complex industry data easy for loan officers, real estate agents and homebuyers to understand.
Related Stories
Posted by Chris B Johnson REALTOR® at 10:53 AM