by Mark Schniepp and Ben Wright 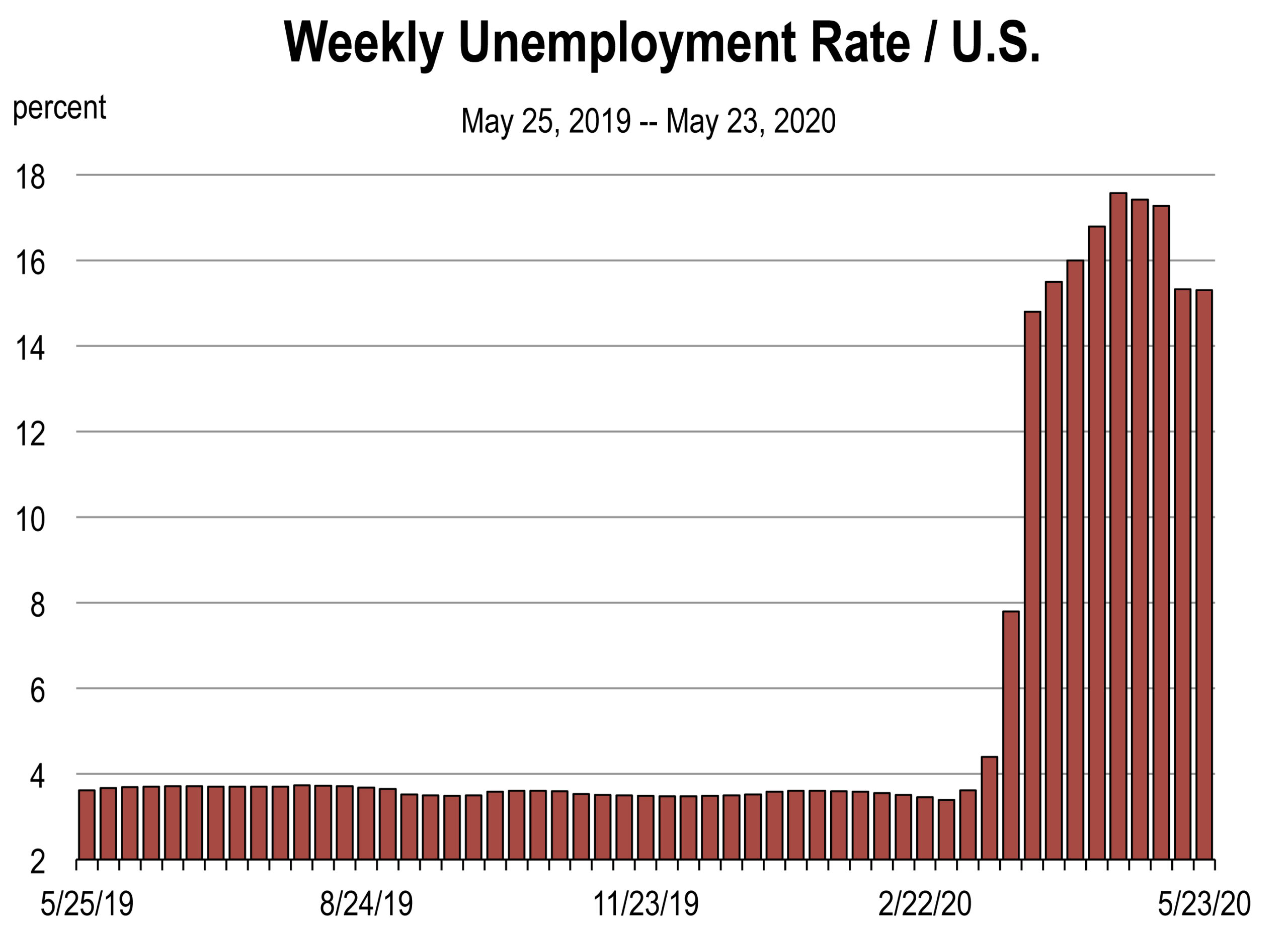 The U.S. unemployment rate was virtually unchanged last week after a sharp improvement during the week of May 16th.

The reopening process, along with PPP loans and other fiscal/Fed support, have brought millions of people back to work and put the economy into rebound mode.

The California job market is also improving, but there is considerable uncertainty about the unemployment rate. The most timely labor market indicator – claims for unemployment insurance – has been erratic for California, and we’re not exactly sure what’s causing the volatility.

The number of reported claims has varied from 2.1 million to 5.1 million during the Coronavirus Recession, and it has bounced around from week to week. There is a clear trend towards fewer claims and lower rates of unemployment, but the labor market situation in any given week has become unclear due to the erratic data. 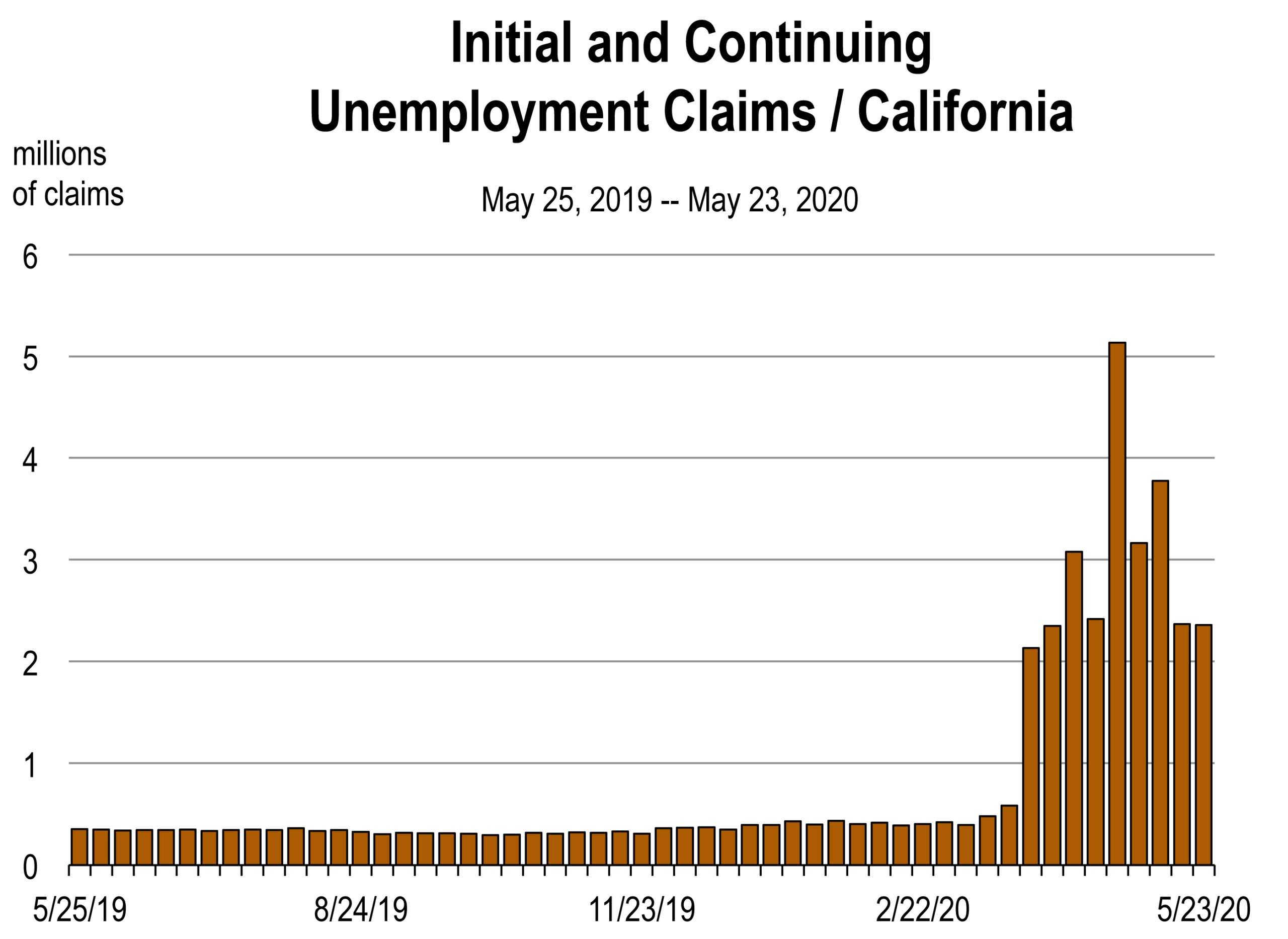 There are many plausible explanations for volatility in the claims data, and it’s possible that people could be entering and leaving the unemployment system in a haphazard fashion. But it’s also possible that the data is not being collected or reported correctly, that California residents are not filing their claims correctly, or that they’re not filing at all.

In any case, we will closely monitor the situation and provide more concrete updates when possible.

For now, most of the counties in California have had many restrictions lifted. Only 9 have not, including Los Angeles, Imperial, Monterey, Lassen, and 5 counties in the Bay Area.

The next phase of re-opening will include a larger swath of businesses, but large public gatherings like weddings and conferences are still prohibited in all but 4 California Counties, and they are unlikely to be allowed soon.

The Impact of the Pandemic on California Counties

The change in the rate of unemployment between April 2019 and April 2020 offers us a consistent comparison of how workers were impacted across California by the pandemic.

Clearly, Los Angeles County was hit the hardest. Not only did it record one of the higher unemployment rates among regions in the state (20 percent), the change from last year was the highest, close to 16 percentage points higher. 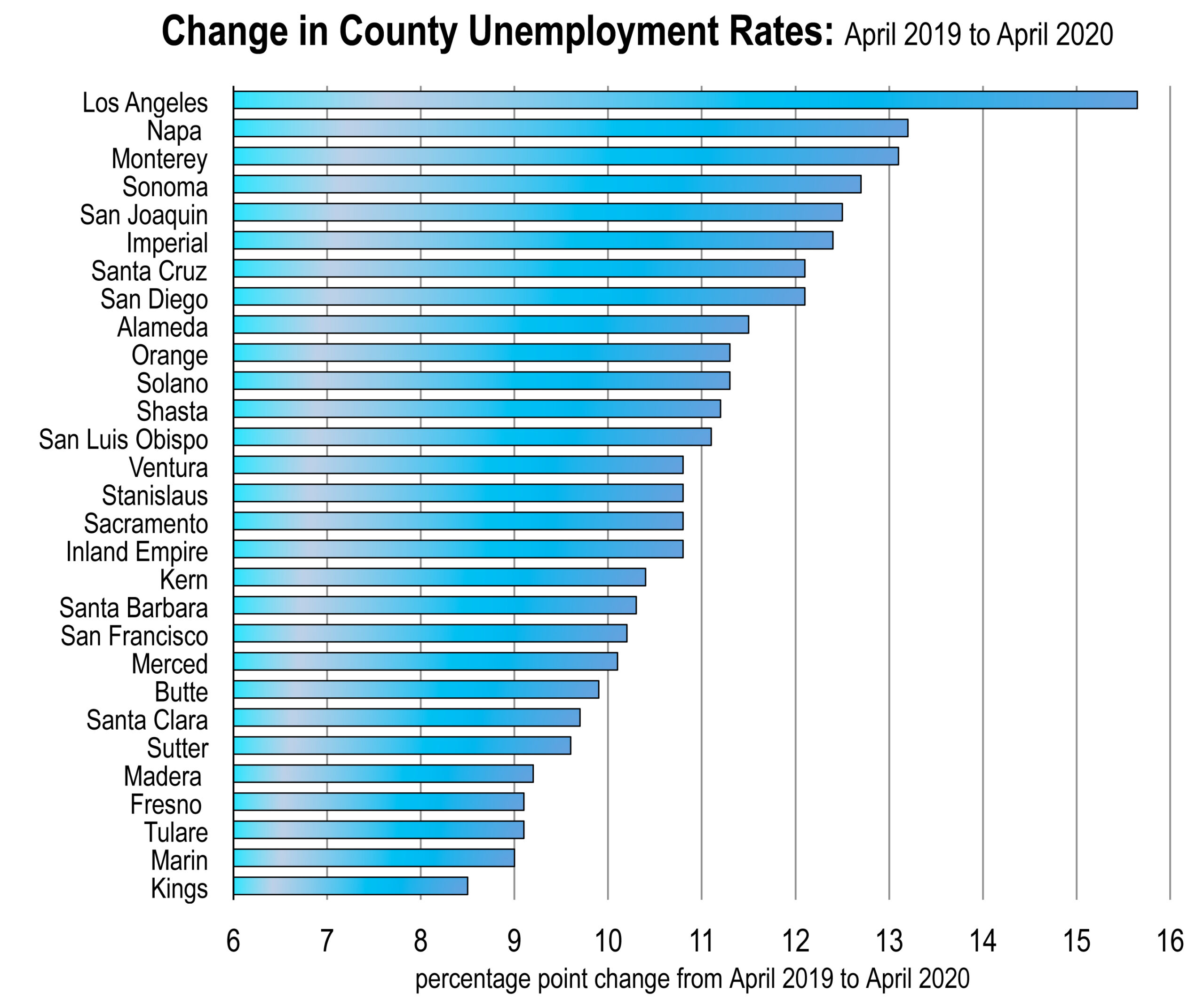 Why Los Angeles County? While it has a large technology sector, it also has the largest entertainment sector in California including film, TV, sound, video, the Dodgers, the Lakers, the Clippers, Universal Studios, Magic Mountain, Hollywood, Santa Monica, the Getty Center, museums, beaches, all of which were shut down or closed.

It has the Ports of LA and Long Beach which were significantly idled by the lack of incoming cargoes from China and elsewhere. It has the second largest airport in the nation with over 80 million passengers annually. Domestic and International passengers were off 96 percent in April.

The biggest changes in the rate of unemployment occurred in the coastal counties or the counties that disproportionately serve visitors (or are home to workers in the tourism industries).

Napa, Sonoma, Santa Cruz, Monterey, San Diego and Orange are in the group with the largest increases in unemployment. However, oddly, San Francisco and Santa Barbara did not join this group. Why not?

Fewer residents of San Francisco are out of work than neighboring counties. This does not imply the County’s plight was any less severe than other Bay Area communities. Because it is largely hospitality and leisure services, it is likely worse. However, most workers in the City don’t live there. They live elsewhere, including the East Bay or further away in Sonoma or Solano Counties. And it’s where you live (not work) that affects regional unemployment. Certainly enough, rates were relatively higher in those counties.

In Santa Barbara, the largest employers are Vandenberg Air Force Base, UCSB, Santa Barbara City College, Raytheon, Procore and County government. These institutions or enterprises were not impacted much with layoffs. Other tech companies are also able to keep workers on payrolls by having them work from home. So many of the tech heavy regions show lower unemployment rates including Santa Clara and Marin (Marin’s tech residents largely work in San Francisco) with the lowest rates of unemployment in the state during April.

The increase in unemployment over year ago levels provides us with some indication of which regions may struggle more to recover from the recession because they have suffered more from permanent layoffs today. Permanent layoffs will be harder to replace as the economy rebounds because a share of those laid off workers will not have a workplace to return to. Many businesses will have failed during the shutdown or during the restart due to capacity limitations on customers and the ability to generate enough revenue to remain viable.

So for now, it appears that the counties that have the least carnage due to the pandemic are Marin, Santa Clara, Santa Barbara, and the Inland Empire. The latter is likely due to its large logistics industry which includes Amazon fulfillment centers and other online warehousing.

Counties like Fresno, Madera, Kern, Tulare and Kings Counties are neither tourism destinations nor technology hubs, but they are farming counties—an industry that was able to remain largely employed over the last 2 months.

The Unemployment Rate Continues to Improve

After rising above 18 percent for the first time in almost a century, the U.S. unemployment rate has decreased for three consecutive weeks. As of May 16th, approximately 15 percent of the workforce was unemployed.

In California, the estimated weekly unemployment rate declined to 21.7 percent.

Just to be clear, the economic crisis is not over. The unemployment rate is still exceptionally high and there are very plausible scenarios that could cause another contraction. The recovery is virtually guaranteed to be long and arduous.

Little has been done to stem the tide of layoffs, and the problem could get worse as capacity limitations for restaurants, retail stores, and event spaces make it difficult for these businesses to remain profitable, potentially resulting in a wave of business closures and more layoffs. These business closures would be permanent, creating permanent job loss.

There could also be another round of reductions in consumer spending due to fear and/or the increase in precautionary saving until the coast is clear.

Furthermore, we might see an acceleration in layoffs at state and local governments that have been devastated by the lack of sales tax, hotel tax, and other revenue for the last 60 days.

We will discuss these scenarios in future updates, but it is important to be aware that the labor market contraction has reversed for now.

by Mark Schniepp and Ben Wright

The Difference Between a Recession and a Housing Crash

Is It Time? Top Reasons to Own Your Home [INFOGRAPHIC]

Is It Time? Top Reasons to Own Your Home [INFOGRAPHIC]: June is National Homeownership Month, and it’s a great time to consider the benefits of owning your own home........................
BY CHRIS B JOHNSON REALTOR® 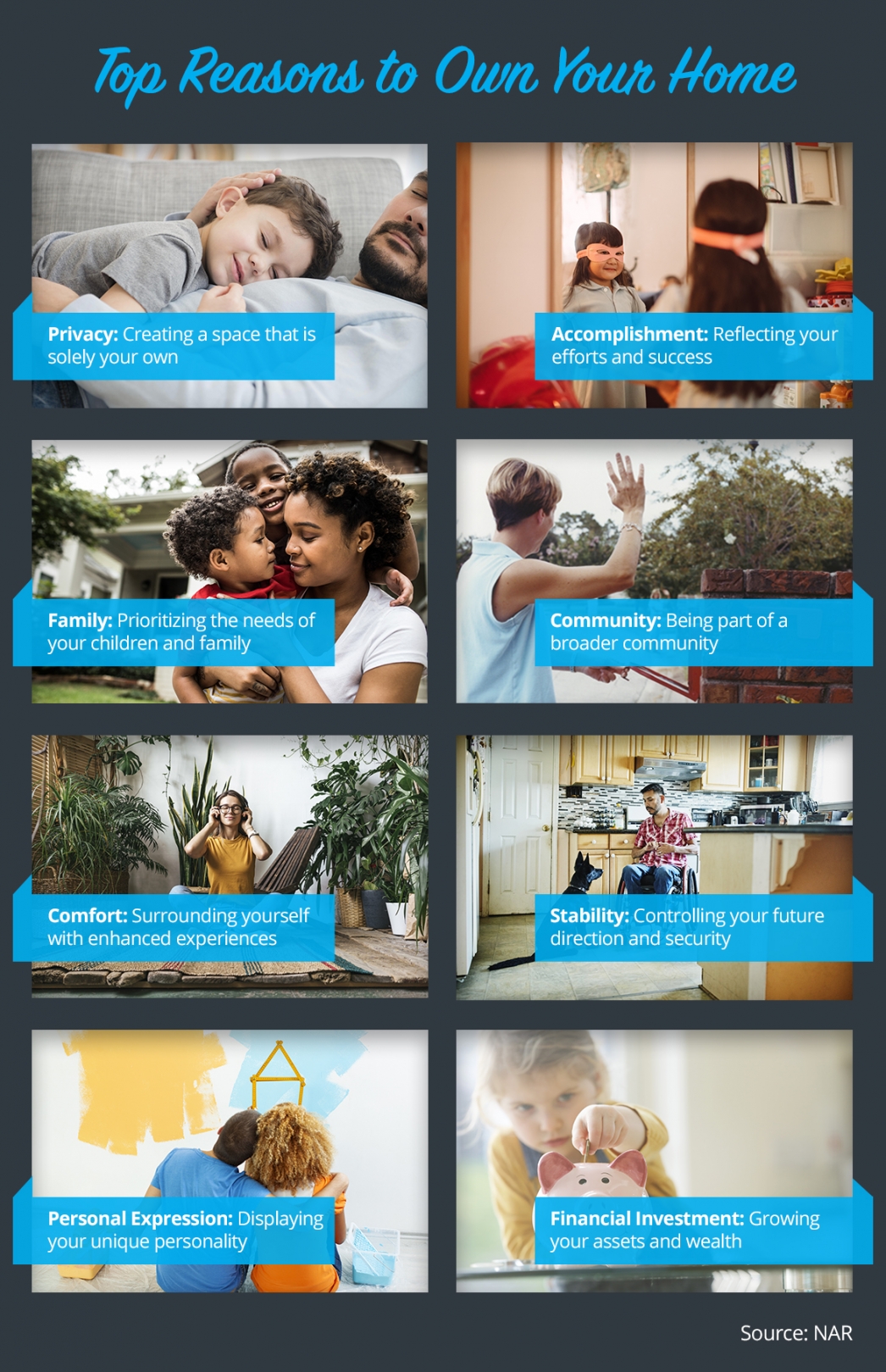 « Economists Forecast Recovery to Begin in the Second Half of 2020

Why Buyers Have the Upper Hand in a Down Market

View my complete profile
The information contained, and the opinions expressed, in this article are not intended to be construed as investment advice. Keeping Current Matters, Inc. does not guarantee or warrant the accuracy or completeness of the information or opinions contained herein. Nothing herein should be construed as investment advice. You should always conduct your own research and due diligence and obtain professional advice before making any investment decision. Keeping Current Matters, Inc. will not be liable for any loss or damage caused by your reliance on the information or opinions contained herein.
LIKE