SoCal Mortgage Rates Finally Fall as The Fed Agrees toHold Rates: Moving into summer, we expect rates to be about a quarter to half a percentage point lower than where they were last year, which is good news for the Southern California housing market... 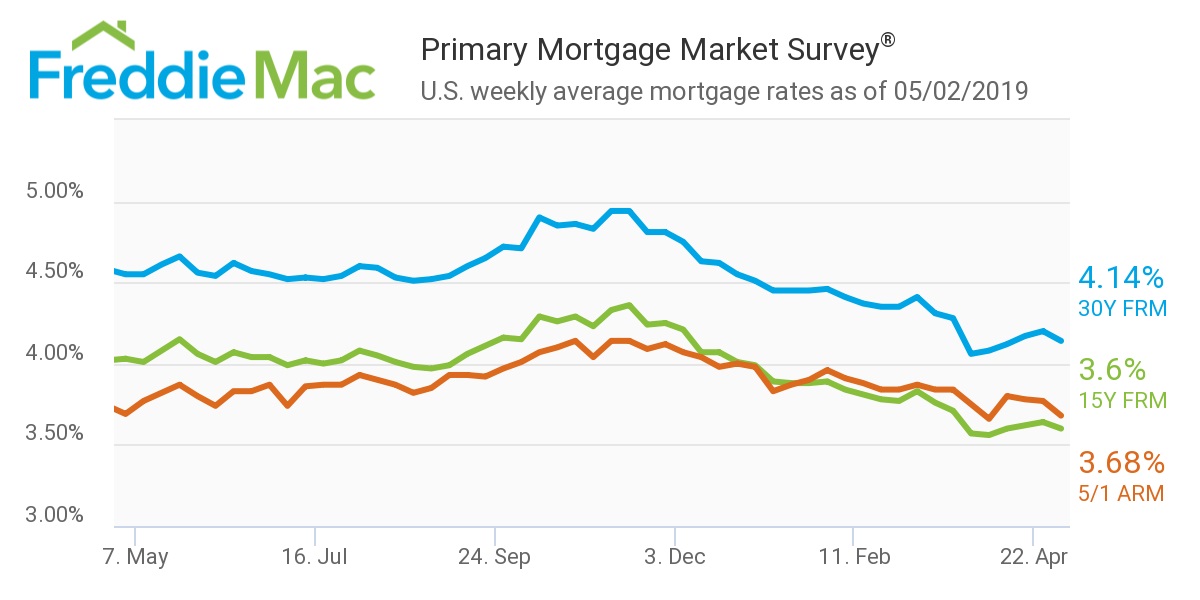 “Moving into summer, we expect rates to be about a quarter to half a percentage point lower than where they were last year, which is good news for the housing market,” Khater said. “These lower rates combined with solid economic growth, low inflation and rebounding consumer confidence should provide a solid foundation for home sales to continue to improve over the next couple of months.”

After four weeks of consecutive gains, mortgage interest rates finally reversed course, according to the latest Freddie Mac Primary Mortgage Market Survey.
The 30-year fixed-rate mortgage averaged 4.14% for the week ending May 2, 2019, down from last week’s rate of 4.20%. A year ago, the rate was 4.55%. The Fed’s closely watched benchmark rate will remain in a range of between 2.25% and 2.5%. The Fed’s rate is the rate charged to banks that lend to each other. Its key rate does not have a direct impact on mortgage rates but does often influence them.
The Fed’s decision to hold rates steady likely will result in little change to mortgage rates, Moneywise.com reports. This week, mortgage financing giant Freddie Mac said it expects favorable mortgage rates for the remainder of this year. It projects the 30-year fixed-rate mortgage to average 4.3% for 2019, below last year’s average of 4.6%.
“Economic activity rose at a solid rate,” and job gains remain solid, the Federal Open Market Committee said in a statement on Wednesday following its two-day meeting. The jobless rate is at 3.8%, the lowest level in 50 years. The economy has performed much stronger in the first quarter than many economists anticipated, CNBC reports. The GDP has increased 3.2%, and the financial markets are performing stronger. The Dow Jones Industrial Average is up 14% for 2019.
Fed officials, so far this year, have backed away from original plans to continue tightening rates in 2019, following several increases in 2018. Many officials have cited concerns about a slowdown in global growth. Originally, the Fed signaled two rate hikes this year. But it has since changed those projections to zero, as of the end of its last policy meeting in March.
“The economy looks better than it did when the Fed last met in March, but with inflation readings continuing to decelerate, the Fed is no closer to resuming rate hikes,” says Greg McBride, Bankrate’s chief financial analyst.